Enter the Kettlebell! Strength Secret of the Soviet Supermen by Dragon Door Publications 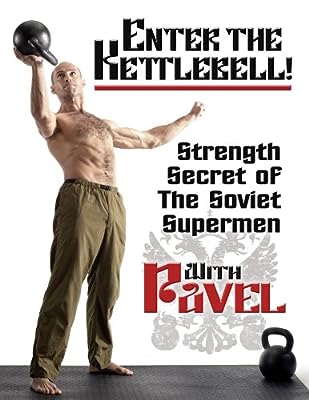 View eBay Options
In Stock.
Product Information (more info)
CERTAIN CONTENT THAT APPEARS ON THIS SITE COMES FROM AMAZON SERVICES LLC. THIS CONTENT IS PROVIDED 'AS IS' AND IS SUBJECT TO CHANGE OR REMOVAL AT ANY TIME.

The kettlebell. AK-47 of physical training hardware. Hunk of iron on a handle. Simple, sinister, brutal and ferociously effective for developing explosive strength, dramatic power and never-say-die conditioning. The man s man s choice for the toughest, most demanding, highest-yield exercise tool on the planet. Guaranteed to forge a rugged, resilient, densely-muscled frame built to withstand the hardest beating and dish it right back out, 24/7.

Once the prized and jealously-guarded training secret of elite Russian athletes, old-school strongmen and the military, the kettlebell has invaded the West. And taken no prisoners thanks to former Soviet Special Forces physical training instructor and strength author, Pavel Tsatsouline's 2001 publication of The Russian Kettlebell Challenge and his manufacture of the first traditional Russian kettlebell in modern America.

American hardmen of all stripes were quick to recognize what their Russian counterparts had long known nothing, nothing beats the kettlebell, when you re looking for a single tool to dramatically impact your strength and conditioning. A storm of success has swept the American Strength and Conditioning landscape, as kettlebell Comrades have busted through to new PRs, broken records, thrashed their opponents and elevated their game to new heights of excellence.

Pavel lays out a foolproof master system that guarantees you success if you simply follow the commands!

When you rise to the challenge and Enter the Kettlebell! there will be no more confusion, no more uncertainty and no more excuses only raw power, never-quit conditioning and earned respect.

Pavel's Enter the Kettlebell! helps you weed out weakness... develop explosive power, strength and never-quit endurance with his PROVEN system for rapid, spectacular and across-the-board gains in physical performance

The kettlebell has proved its worth many times over since Pavel has introduced it to America. Elite athletes, fighters, special operators, and regular hard Comrades swear by the extraordinary strength and conditioning delivered by this ancient Russian tool.

Now, it is YOUR turn to Enter the Kettlebell!

For a kettlebell novice, the hardest part is knowing where to begin. And what you really need to do to get off to a quick yet rock-solid start.

For the Comrade who s already put in a year or two of kettlebell time, it s easy to hit a plateau after explosive early gains. Pavel knocks him out of his sophomore slump and helps him take his game to a higher level.

Then there s the grizzled KB vet who s been around the block and got too arrogant to practice his fundamentals (or never learned them in the first place). Pavel hammers the fundamentals because it is the mastery of the basics that separates the elite from the rest.

With Enter the Kettlebell! Pavel has done all the work for you honing a masterplan of essential training secrets that guarantee to make you powerful, resilient, and enduring if you simply follow the proven guideline

The Best Products on eBay Cookies help us deliver our services. By using our services, you agree to our use of cookies. Learn More Accept

Wait! We have something for you...

Don't leave empty-handed! Simply enter your email below and we will send you a great discount on our products:

We hate spam as much as you do! Your details are never shared and you can unsubscribe at any time.